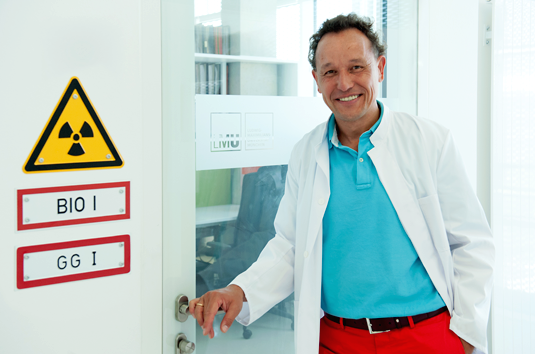 Among the awardees of this year's prestigious Lundbeck Foundation Brain Prize is Professor Christian Haass, Chair of Metabolic Biochemistry at LMU and Spokesperson for the German Center for Neurodegenerative Diseases (DZNE) in Munich. The 2018 Brain Prize also goes to Professors Bart De Strooper (London and Leuven), Michel Goedert (Cambridge) and John Hardy (London). All four scientists are honored for their groundbreaking research into the genetic and molecular bases of Alzheimer’s disease.

The research pioneered by these four European scientists has revolutionised our understanding of the changes in the brain that lead to Alzheimer´s disease and related types of dementias. This year’s Brain Prize winners have, individually and together, made essential contributions to the genetic and molecular knowledge of Alzheimer’s disease upon which the search for new ways to diagnose, treat and possibly even prevent it and other devastating diseases of the ageing brain, are based.

Professor Haass research into Alzheimer’s has focused on “the cascade of events that begins with amyloid and progresses through the development of plaques and tangles, which eventually kill brain cells and destroy memory,” he said. Haass hypothesised that amyloid production may occur normally and may not necessarily be part of a pathological process, a suggestion which was at variance with the widely accepted general opinion in the field at the time. This pivotal finding was highly significant, and has since led to the development of therapies to lower amyloid production in patients. Working with John Hardy, Professor Haass demonstrated how amyloid is generated and how genetic mutations seen in families with very aggressive and rare forms of Alzheimer’s affect its production.

Most recently, Professor Haass has generated mouse models to investigate inflammation in neurodegenerative disorders, which according to his findings may at least initially play a protective role. He found that genetic mutations alter the function of special immune cells called microglia in the brain that can lead to Alzheimer’s disease. This has stimulated a completely new approach to designing possible new therapies by modulating the activity of microglia.