The mission of the scientists working in CoTeSys is the transfer of cognitive skills, which are attributed to animals and humans, to technical systems such as robots, manufacturing systems and vehicles. They study how robots can perceive their environment and react appropriately to it, how machines can cooperate with people in a way that humans can cope with, both physically and intellectually. 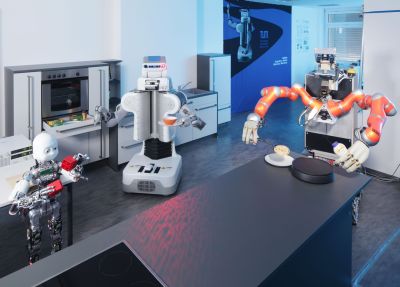 These activities all require that machines can learn. A service-robot in the “cognitive kitchen” learns not only the locations and functions of drawers and cupboards, but also movements, manipulations, grasping and procedures in order to, for example, set a table or fry up some pancakes. In the “cognition-enabled factory”, an industrial robot equipped with cameras, touch and force sensors could assist humans in the assembly of custom-tailored products.

Cognitive technologies are the crux, in that they differ from other technical systems through their cognitive capabilities and hence ability to perform cognitive control. Cognitive control orchestrates reflexive and habitual behavior towards long term autonomy and intentions. Cognitive capabilities include perception, reasoning, learning and goal-oriented planning, which result in systems of higher autonomy, flexibility, adaptivity, reliability and robustness, enabling better interaction with humans and improved collaboration capabilities. 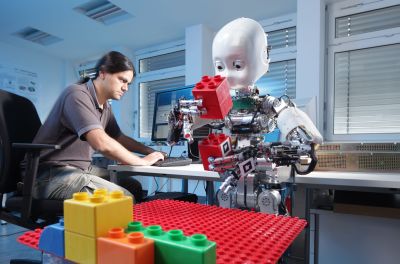 In order for machines and humans to work together, machines must learn to accomplish tasks the way humans do. Only if robots are able to recognize their environment, react flexibly, respond intuitively and to a certain extent autonomously, are they able to assist human beings in an overall manner, sparing the creator the need to write computer programs for all possible events that may ever occur. Be it service robots or industrial robots, the scientists in CoTeSys work devotedly on the realization of robots as assistants for many aspects of life. Cognition technology poses all kinds of questions in brain research, psychology and biophysics, computer science, mechanical engineering, control engineering and mechatronics. Solutions are found only in close, interdisciplinary teams. The practical implementation of the theoretical findings is of high importance to CoTeSys. Therefore, all theoretical results have to be demonstrated in technical demonstration scenarios, to verify and validate the superiority of cognitive approaches. These scenarios provide means for applying, integrating, validating and analyzing new research methods in the context of real-world scenarios that are of critical importance economically and to society.

Since 2006, CoTeSys has pooled the expertise of around 100 scientists from the Technical University of Munich, the Max Planck Institute of Neurobiology, the Ludwig Maximilians University Munich, Universität der Bundeswehr (German Federal Armed Forces University of Munich) and the German Aerospace Center (Forschungszentrum der Bundesrepublik Deutschland für Luft- und Raumfahrt - DLR) in Oberpfaffenhofen. CoTeSys therefore belongs to the largest interdisciplinary research clusters in the field of cognition.

CoTeSys can report numerous success stories which give examples on how to bridge the gap between fundamental research in neurocognition, psychology, informatics and engineering. CoTeSys attracts top international scientists as new junior and tenured professors, and has a significant impact on academia, industry, future societies and the general public. CoTeSys is highly successful in establishing Independent Junior Research Groups and is involved in several educational gender projects, attracting young girls and boys to scientific and technical professions. 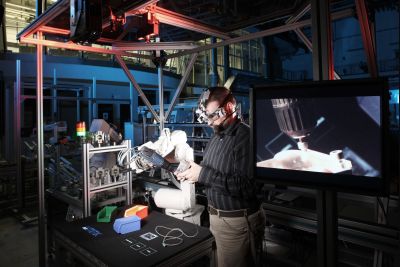 It is an explicit goal of CoTeSys to promote more women into senior positions. CoTeSys has successfully established two Central Robotics Laboratories CCRL-I in Barerstraße and CCRL-II in Karlstraße, both located in downtown Munich. CoTeSys is one of the strategic projects supported with federal and state funds through the German Excellence Initiative.