The LMU-Harvard Young Scientists' Forum (YSF) "From Molecules to Organisms" seeks to unite researchers from Harvard University and LMU Munich through enabling Ph.D. students and postdoctoral fellows to have contact with core faculty from both universities. The goal is to create a framework for an interdisciplinary, as well as an international exchange of ideas.

The first meeting in the series was held at LMU-Munich in 2009, and a similarly structured meeting was convened at Harvard University in the following year.

After last year's canceled event, a total of more than 70 academics from both institutions have met in the first virtually-held Harvard-LMU Young Scientists' Forum.

Presentations included a mix of 45-minute lectures and 2-hour sessions for posters and short 20-minute-talks.

Among the participating labs at Harvard who have presented and nominated delegates for the event were the groups of:

An abstract compilation and a detailed participants' list are available in the 2021 YSf Booklet.

PLEASE NOTE: The event had to be cancelled due to the COVID-19 pandemic.

The 11th meeting of the Harvard-LMU Young Scientists' Forum has taken place June 24th-26th, 2019, at LMU Munich, following a welcome reception at the LMU Center for Advanced Studies on June 23rd.

Similar to the 2018 meeting in Cambridge, the 2019 YSF touched on the formation, function, and dynamics of neuronal structures, as well as cognition and behavior with some emphasis on neural circuits in localization, spatial processing, and navigation.

The meeting was once again complemented by an optional excursion on June 27th, to continue the scientific discussions in a different setting.

Among the 40 scientists who presented their data at the 2019 YSF, were 16 Harvard delegation members (PhD students/postdocs/faculty) representing 12 Harvard labs, and 24 Munich contributors representing 20 local groups.

* All participants are indicated in the Meeting Schedule.

The anniversary 10th meeting of the Harvard-LMU Young Scientists' Forum took place July 23-25, at the Center for Brain Science in Cambridge, Massachusetts.

The schedule comprised the guests' arrival on July 22, an optional excursion on July 26, and departures on July 27.

As in previous years, a Munich delegation of faculty members and postdocs/advanced PhD students have met a matching number of participants from Harvard for an in-depth exchange on topics ranging from molecular and circuit neuroscience to computational, behavioral, and clinical research areas.

Both participating and nominating faculty members, as well as executive representatives, have indicated an interest in maintaining the YSF-Format in the years to come. We are looking forward to the 11th return of the YSF in 2019 - to be hosted in Munich. 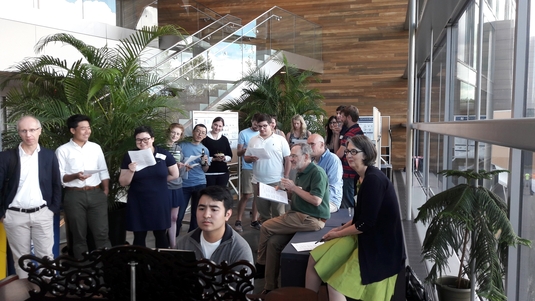 A special moment during the 2018 meeting

The 2017 YSF meeting took place at LMU Biocenter and Center for Advanced Studies (CAS) between the 23rd and 26th of July.

The meeting took place at the Center for Brain Science and the Harvard Medical School. Traditionally, the yearly alternating format covers a broad range of topics ranging from Biochemistry and Genetics to Translational Neuroscience. The scientific schedule of the three-day meeting in 2016 featured 18 LMU delegates, among which academic staff and students from the LMU Faculty of Biology, Faculty for Chemistry and Pharmacy, and Medical Faculty, as well as the Helmholtz Zentrum München (HMGU).

The meeting took place at the Center for Advanced Studies and the Campus Martinsried. The scientific program of the three-day meeting (June 29 - July 1) was complemented by a welcome dinner on June 28 and an excursion day on July 2.

6 faculty lectures were scheduled, in addition to 36 oral and/or poster contributions by advanced PhD students and postdocs nominated by Harvard and Munich faculty.

Lectures are open to everybody 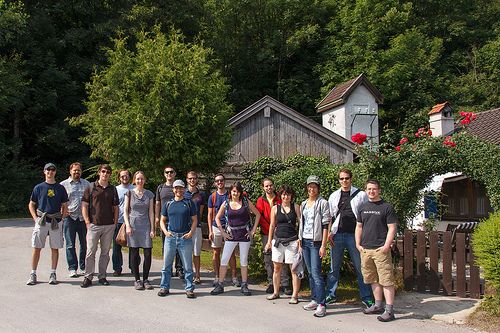